Banjovi Revival was formed by Joyce Wooster over 26 years ago.  Over the years numerous people have joined and left our group, all having one thing in common, enjoying the love of playing their instruments and performing in a live band to local venue's. 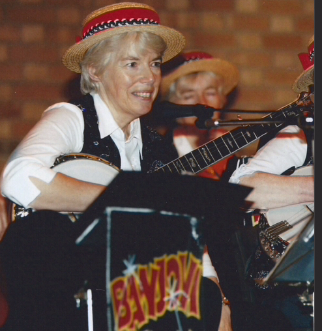 Joyce studied plectrum banjo under the direction of Percy Wooton. She also plays tenor banjo, violin and mandolin. She has previously been a member of the Adelaide Banjo Band, Watford Plectra Orchestra and the London Mandolin Ensemble and is currently playing with several other bands.
She formed Banjovi Revival in the early nineties under the original name of 'Safety in Numbers' and the band have since progressed to playing in hundreds of different venues.  Music has played a very large enjoyable part in her life. 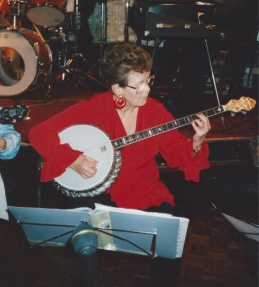 My interest in banjos has been with me all my life.  My father always played a banjo on high days and holidays and even as a young child I decided that when the time was right I would play one too. Although I dabbled around with Dad’s instrument unfortunately I did not really have the chance to play properly until quite late in life, i.e. in my 50s.  I bought a tenor banjo and met Jim Cox who was a brilliant player of all string instruments and he talked me into having a plectrum banjo instead and I now have a Silver Bell which is brilliant.

Shortly afterwards I was introduced to Percy Wootton who originally lived in Bucks and then moved north and I did travel there for a couple of lessons.  We kept in touch and one day I had a letter from him saying that he was coming to the area and all his pupils were meeting in a pub in West Wycombe and it was there I met Joyce and subsequently had a few lessons.  Eventually Joyce formed her own band called Banjovi Revival and I have been in it ever since. Banjovi Revival have raised thousands of pounds for various charities. We have had some great times and now I am semi-retired at 82 but I still play when I can. 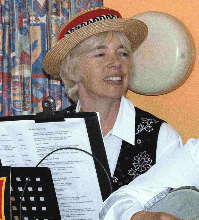 Maggie joined the band in 1996 after she retired from nursing and has been using her share of the donations to support the Princes Centre in Princes Risborough. She also plays in the Towersey Folk Dancing Band and her husband's Black Dog Band. In her spare time she 'plays' the uilleann pipes which the family describe as listening to a cow in distress. 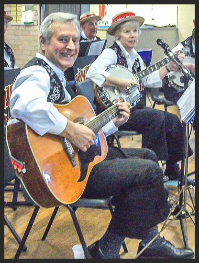 I joined the band in 2013 having previously played in a couple of folk groups in the 1970’s/80’s.  One of the groups was called “The Dregs” and had a brilliant catch-phrase “He was only a singer with The Dregs but what he sediment”.  I’m afraid that is typical of the type of humour in some of the songs I do.  I am very partial to 60’s and 70’s pop songs and they form a good part of my repertoire.

Jenny has been playing the Banjo since she was 12 years old. Previous to this she played the Violin and Guitar.  Jenny had the same banjo teacher, Percy Wooton as Joyce and Pauline and is very privileged to have inherited Percy's Banjo. She joined Banjovi in her mid twenties and continues to enjoy playing with the band mostly playing at weekends and evenings performances. 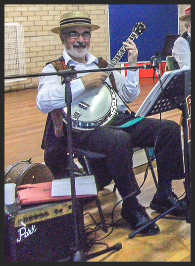 Rod been singing and playing the banjo since he was a student in the 1960’s. He plays cornet in a brass quintet , a silver band and with several different jazz groups but joins Banjovi whenever he can. 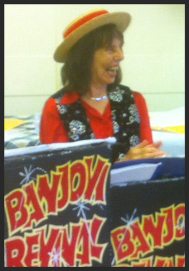 Sally has sung in quartets, musical productions and solo since beginning in a church choir at 14.  She joined Banjovi Revival about 14 years ago and has enjoyed every minute!